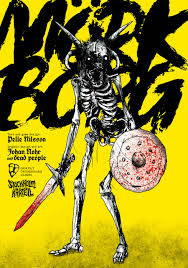 What did I just read?
That was my immediate thought after attempting – and failing – to read Free League’s apocalyptic fantasy roleplaying game, Mörk Borg. As you can probably gather from its title, Mörk Borg (meaning “Dark Fort”) originates in Scandinavia, specifically Sweden, and is the brainchild of writer Pelle Nilsson and graphic designer and artist Johan Nohr. Together, they have produced, in their own words, “A doom metal album of a game. A spiked flail to the face. Rules light, heavy on everything else.”

I bought Mörk Borg solely because of its physical characteristics. A local friend of mine raved about it months ago and then, while perusing Free League’s website recently, I caught a glimpse of it in all its lurid glory. I was so intrigued by its bright yellow cover and black, white, and red artwork that I ordered a copy and anxiously awaited its arrival. I was not disappointed when it appeared at last: the 96-page A5 book is sturdy and well-made, like so many European RPG books these days. Most of the paper in the book has a satin finish, but its last section, presenting an introductory adventure, has a rough, natural feel to it.

The graphic design is remarkable. Scarcely a single page looks like any other, both in terms of layout or the headers, fonts, and other elements used. This gives the whole book a jumbled, chaotic feel to it, which no doubt contributed to my initial inability to make heads or tails of it. Nohr’s illustrations, whose execution runs the gamut from primitive to florid, are accentuated by a riot of bold colors – red, yellow, and pink – that contrast with the black and white pages, with occasional silver highlights, that make up the bulk of the book. The overall effect is disorienting and I expect that was intentional. Unlike most RPG rulebooks, particularly those “in the OSR genre” (as the game describes itself), Mörk Borg can’t be easily digested in a single reading. That was my mistake.

Mörk Borg is laconic, even elliptical, in its prose. Much is left to the reader to infer from its short, suggestive paragraphs. This is particularly true in the early sections of the book, which introduce the game’s setting. Brief sketches are given of the major locations of the world, such as Galgenbeck, “the greatest city that ever was,” the vast cemetery of Graven-Tosk, Kergüs, ruled by Blood-Countess Anthelia, and the Valley of the Unfortunate Undead, among others. There’s a map of sorts included, but there are few details and no scale. Instead, it’s largely impressionistic, depicting relations between the named locales rather than showing how many miles Wästland is from the city-state of Grift.

This should come as no surprise, as Patrick Stuart is credited with both “English writing and creative consultation.” Stuart is well known for his gnomic writing, most famously in Deep Carbon Observatory and Veins of the Earth. I must confess that the appeal of Deep Carbon Observatory eludes me, which likely speaks to my own mental dullness, but here the prose strikes the just right balance between cryptic and opaque. Rather than feeling thwarted, I felt transported and I have little doubt that Stuart played a significant role in shaping Pelle Nilsson’s words to achieve this effect.

The prophecies of the recently discovered Nameless Scriptures accurately predict the coming death of this world. As events unravel, “reality decays, truth becomes dream and dream, truth. Cracks grow in the once-stable structures of the past, allowing things misshapen and vile to worm through, emerging into day’s wan light.” This is the backdrop against which Mörk Borg is set – a dark, depressing, and cruel place burdened with miseries aplenty (there are even random tables for determining which misery befalls the world each dawn, in accordance with the texts of the Nameless Scriptures). In this respect, it’s kin to games like the venerable Warhammer Fantasy Roleplay or the more recent Shadow of the Demon Lord in being more a “pre-apocalyptic” fantasy, albeit steeped in an extra layer of Nordic gloom.

The rules of Mörk Borg are where OSR influences are the most apparent. Character generation is completely random; everything from ability scores to equipment is determined by dice rolls. There are four abilities – Agility, Presence, Strength, and Toughness – whose scores range from –3 to +3. Character action (or tests) are made by rolling against a difficulty rating (DR) on a d20 and adding the appropriate ability score. The book provides numerous options for character generation, most of which are not additional or expanded rules as such but rather flavorful random tables. A notable exception are six optional character classes, each of which grants one of several random abilities and a bit of background. Even then, these abilities are more inspirational than mechanically significant. I would say that Mörk Borg is in the vicinity of Moldvay/Cook D&D in terms of its overall rules complexity, with slightly more options.

Combat is handled similarly to other tests, though it is worth mentioning that players roll for both their characters’ attacks and their defense against enemies’ attacks. Armor is ablative and there are critical hits and fumbles. Hit point totals are low and, while healing through rest is available, magical curatives are uncommon. Indeed, magic of any kind (called “powers” in the game) are both unusual and comparatively weak, particularly when measured against RPGs like D&D or RuneQuest. Consequently, lethality is high, a fact the text brings up repeatedly, most memorably in the character generation section, whose fifth step reads: “Name your character if you wish. It will not save you.”

Flavor and randomness are the hallmarks of Mörk Borg. The book is littered with random tables (including the front endpapers) that either aid the GM (e.g. corpse plundering or the traits of followers) or convey the feel of the setting (e.g. weather or NPC names). Table results are generally allusive and free of game mechanics, in keeping with the tenor of the game. Intriguing hints and redolent intimation are Nilsson’s idiom. In this way, he offers the GM and players free rein in deciding what it all means in their own campaigns. Readers used to more traditional RPG rulebooks might therefore find Mörk Borg frustrating at first due to its seeming disinterest in straightforward and unambiguous prose, whether in describing its setting or presenting its rules. That’s certainly how I felt initially, but it’s also why I kept picking the book up and trying again: there’s more to this game than its terse text would suggest.

Mörk Borg includes twelve creatures, such as berserks, blood-drenched skeletons, undead dolls, and wyverns. Like everything else in the game, their game statistics are simple and their descriptions pregnant with inspiration. For example, each entry includes the creature’s value in silver pieces if sold, whether alive, dead, or in pieces. An adventure, entitled “Rotblack Sludge, or The Shadow King’s Lost Heir,” rounds out the book. Described as a dungeon crawl, the adventure is nicely presented, employing a series of bullet points, bold and underlined words, and boxed text to draw the GM’s attention to important details and thereby make it easier to use in play. The adventure also provides additional examples of creatures, as if to reassure the GM about the ease with which new opponents can be created.

If I have any criticism of the book, it’s that, for all its mechanical simplicity, Mörk Borg is probably not a good choice for a newcomer to the hobby. The text assumes, I think, that you’re already familiar with RPGs generally and with old school Dungeons & Dragons and its derivatives in particular. Given the popular resurgence of D&D in both its contemporary and “classic” varieties, I don’t think this a damning criticism. I’m on record as doubting the efficacy of “what is a roleplaying game?” sections in RPGs anyway and believe that the best way to learn to play is to be inducted into the hobby by an existing player. As a game, Mörk Borg is no more difficult to learn than most other old school RPGs; as a rulebook, however, it’s neither an ideal introduction nor a handy reference.

I struggled when writing this review, in large part because so much of what defines Mörk Borg is conveyed via art, layout, and graphical elements whose effects are hard to translate into words. Reading – and understanding – Mörk Borg is almost as much a sensory experience as it is a textual one. I’m not certain it’s possible to grasp what the game is and what it’s about without actually holding the book in your hands and reading it. Even then, I personally found it hard going; it took multiple attempts before I appreciated Mörk Borg and its unique take on fantasy roleplaying.

I might have had an easier time if I had been an aficionado of metal bands. As noted earlier in this review, Mörk Borg is self-avowedly a “doom metal album of a game” and includes a list of “music that helped,” which serves as the its Appendix N. I’ve written in the past about the role played by metal and metal fans in shaping the modern conception of fantasy, but, as I said then, my direct familiarity is limited. This lacuna in my cultural education no doubt contributed to my initial confusion with Mörk Borg. Viewed through the lens of metal music and its accompanying imagery, Mörk Borg makes so much more sense. Approach it with that in mind and you’ll likely have an easier time than I did in appreciating its unique vision.

Mörk Borg is not a game I would have expected to like as much as I do. So much about it, from its garish colors and “artpunk” esthetics to its gloomy, edgy tone would seem to run counter to my own personal preferences. Yet, somehow, Mörk Borg not only works on its own terms but also managed to capture my imagination. I’ve re-read it several times now, gaining new impressions each time I’ve done so, aided in part by some of the wonderful (and attractively presented) free support material available on the game’s website. This is a fantasy roleplaying game that has lodged itself in my imagination, which is a remarkable thing, after having read so many others over the course of my life.

If anything I have written here intrigues you, I recommend you take a chance on Mörk Borg. Even if you never play it, the game can serve as a source of inspiration and a reminder that the old school scene is still a source of boundless creativity.
James Maliszewski at 7:17 PM
Share